Buy Now, Pay Later- Save 20% on Windows and Patio Doors, Pay Nothing for 2 Years!
Schedule a Free Consultation
x
A note to our homeowners about the coronavirus. Your health and safety is our first priority. Virtual Consultations Available 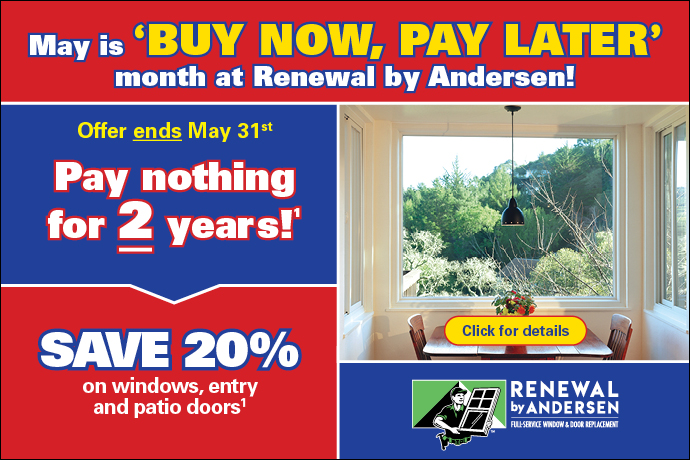 / Events / Win $10,000 in New Windows and Doors! Enter the Renew Your Home Sweepstakes

Renewal by Andersen is in the midst of it’s biggest sweepstakes ever! A $10,000 grand prize will be awarded to 4 different winners this year and we will be giving out prizes each week leading up to the big giveaway. Enter to win $10,000 in Renewal by Andersen products and spruce up your home in ways you have only imagined. Bay windows, new doors, what would you dream up if you won?

The Renew Your Home Sweepstakes (the “Promotion”) is a series of four separate sweepstakes periods:

Grand Prize includes one (1) voucher usable for Renewal by Andersen® products and accompanying installation awarded in the form of a Gift Certificate (terms and conditions apply).  Approximate Retail Value: $10,000.  Prize is non-transferable and no substitution will be made except as provided herein at the Sponsor’s sole discretion. The number of eligible entries received during each respective Promotion Period will determine the odds of winning a Grand Prize.   Sponsor reserves the right to substitute the prize for one of equal or greater value if the designated prize should become unavailable for any reason.  Winner is responsible for all taxes and fees associated with prize receipt and/or use of the prize.

Total ARV of all Grand Prizes to be awarded in this Promotion is $40,000.